In a heartwarming moment, a birth mother and daughter finally met face to face, all thanks to a DNA kit. The meeting was recorded on video for posterity. 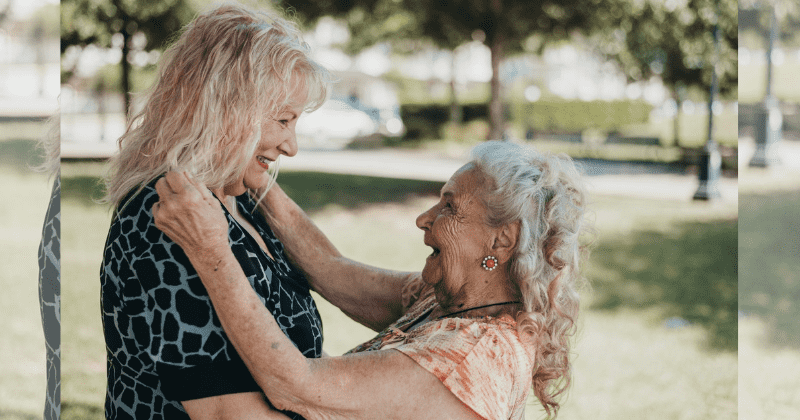 A 90 -year-old woman from North Carolina finally met her daughter who she gave up for adoption 70 years ago reports the Daily Mail.  The heartwarming reunion took place on Monday at the Sugar Mill Pond in Youngsville, Louisiana.  Elizabeth Pullen stood waiting while her daughter Lynne Wray had her eyes covered and was ushered towards her by Pullen's granddaughter, Wanda LeBlanc, 36. The meeting was also arranged by LeBlanc who is a professional photographer and captured the touching moment on video. In the video, Pullen was seen visibly jumping with joy and in anticipation said, "Lynne I am so excited." Before the final reveal, they both had their backs against each other,  but Pullen managed a sneak peek of Wray's head from behind, and said, "You're taller than momma." They then hold hands while they still have their backs against each other and gradually turn towards each other. Pullen enthusiastically hugged Wray in a deep embrace. Wray said, "You look like me, don't you" to which Pullen replied, "You're beautiful." Her daughter added further, "It was worth the wait, right?" Throughout the video, Pullen continued to hug her daughter at regular intervals while staring at her lovingly in between the hugs.

This was the first time that Pullen even got to see her daughter and even touch her as the adoption laws and procedures back in the 1940s were very strict said LeBlanc. In fact, a mother was not even allowed to even see her own baby once they were born. Babies were covered and were taken away from their mother during those days.  It was on May 6 that it was truly the first time that Pullen and her daughter had any kind of real contact.

The meeting happened after LeBlanc dug into her family history and did some detective work. She had taken a DNA test around Christmas and noticed an unfamiliar name under the list of her closest relatives. The name was that of Wray. Some DNA tests also allow users to check the entire family database to find matches to people who may be related. It also allows them to contact their possible family member.  When LeBlanc clicked on Wray's profile, it read,  "I was adopted and have never met my birth family."

In a Facebook post, LeBlanc stated how she organized the meeting. I emailed her and anxiously awaited her phone call. When we spoke for the first time she told me her birth city and the only information she was given is that her birth Mom is part Indian. She took the DNA test years ago in hopes of finding her birth family with no luck. Unable to connect the dots, I reached out to my Mom and Grandmother. After talking to my Mom and Grandmother, my Grandmother opened up to us about giving up a baby girl for adoption 70 years ago.

She said, "My grandmother was incredibly nervous and it was difficult for her to wait to turn around. I typically do first-looks for brides and grooms (in her photography business), and so I just thought this would be a really unique way for them to see each other for the first time. My grandmother said that she felt free. She and I have always been very close, so for me to be the person who reunited them was special for me, my grandmother, and my aunt."

She continued, "My grandmother isn't in the best health and has often questioned why God has kept her on this earth - now she knows why. My grandmother's message is that it's never too late and not to be fearful of opening up." LeBlanc's post unsurprisingly received a lot of comments. One user said, "Wonderful story. They are lookalikes." Another one added, "Pure joy. So nice it finally happened."

Since the reunion, Lynne's husband and son have headed to Louisiana from North Carolina. At the same time, Lynne's adopted mother also thanked Pullen for allowing her daughter to be part of their lives.