90-Year-Old Woman Graduates With A Master's Degree: "You're Never Too Old To Dream"

Lorna Prendergast took to studying after her husband of 64 years passed away and gradauted in Masters of Ageing. She did an online course. 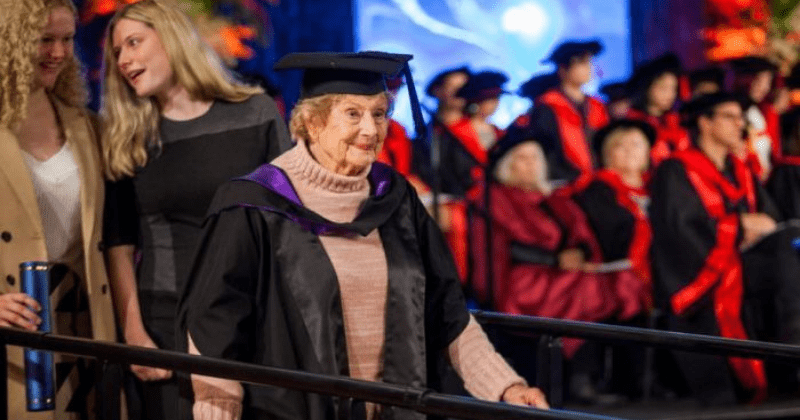 This 90-year-old lady who passed her master's degree is the perfect example of the fact that it's never too late to go back to school and never too late to learn.  Lorna Prendergast, a former telephonist and librarian, who graduated from the University of Melbourne also chose a subject that was close to her heart. She did a degree in the Masters of Ageing. Now, that's a cool name for a degree, wouldn't you say so?  The graduation ceremony was held on Saturday afternoon and Prendergast was the guest of honor. When asked about the message she wants to share about her inspiring story, she said, "You're never too old to dream," reports abc.net.au.

"You're never too old to learn". This 90 year old graduate, Lorna Prendergast, did her Masters online.
Good news story of the day for me.https://t.co/d2m9LVtgcI

Our most recent graduate Lorna Prendergast has a few wise words we could all benefit from. ❤️ https://t.co/QUQ3gRCZuc

Prendergast said that by her example, she hopes that others too can follow in her footsteps. She said, "The more I know now, the more I want them to follow their dreams. Nobody is too old to sit down and say 'I'm too old, I can't do it. There's no such word as 'can't' in the dictionary." She started studying after her husband's death. She knew she had to move on in her life and what better way to do that than to delve into academia. She decided to enroll for an online from the university.

"You're never too old to learn". This 90 year old graduate, Lorna Prendergast, did her Masters online.
Good news story of the day for me.https://t.co/d2m9LVtgcI

It’s not every day a 90-year-old receives a master's degree — and it’s even less common for them to complete the whole course online!
Lorna Prendergast graduated from the The University of Melbourne with a Masters of Ageing, focusing on music as a form... https://t.co/yyvpQI3f10

At the ceremony, she was the only person to be singled out with a special mention by her lecturers. Prendergast was accompanied by her granddaughters for the ceremony and as she received her degree, the entire Royal Exhibition Building where the event was held, erupted in applause and loud cheers for her. A resident of Bairnsdale town located 300 kilometers east of Melbourne she hoped that her own experience would inspire others who may have given up studying to return as its never too old to learn.

Lorna Prendergast is awarded her Masters of Ageing https://t.co/WA8eoTT8Jc pic.twitter.com/kuKS3n673Z

Its never too late to take on a challenge and think big. Inspirational. Congratulations Lorna Prendergast on your Masters of Ageing at the good age of 90. https://t.co/EJCSsBmGR8

Prendergast's husband Jim was an artist who loved aviation. She spent over a year caring for him and after he passed away, she decided on what to do next. It was around this time she watched a program on TV about how music can help people who had dementia. "I thought 'where am I going?' And just by sheer coincidence, I turned on the TV, and there was this program about music doing so much for people with dementia. I just thought 'I want to know something about this', because I'd experienced it in the nursing homes, how music helped the patients up there," she said.

After receiving her master's degree at the age of 90, Lorna Prendergast hopes her story encourages people to recognise that age is... https://t.co/473fjnYC8e

Lorna Prendergast studied for her master's degree online from Bairnsdale. What an absolute champion - she's my new favourite person of all time. https://t.co/EJO5sDLn8B | via @JarrodWhittaker #gippsnews

Thus, her decision was made. She wanted to study how music could be used as a temporary relief for people affected by dementia. She became passionate about her subject and studying it was a joy. Completing it was a breeze thereon.  Returning to studying after such a long time was a challenge especially with the use of new technologies, but for someone who never shied away from a challenge, she took the bull by its horns.

This is just wonderful! Congratulations Mrs #LornaPrendergast... will look at your story whenever I need a little inspiration on my PhD journey @UniNewEngland. #nevertoooldtolearn #unigraduateat90 @unimelb #abcnewshttps://t.co/ArwjulBnMB

"One of the things that took a while to get used to, was when I had to have photographs and presentations and that type of thing, took a little bit of time. But we had a very good technology team at the uni and they're very kind to me and helped me quite a lot," she said.

Rosemary McKenzie, Prendergast's teacher and an Associate Professor at the university said,  "She's got a passion for lifelong learning, she's been an early adopter of our online graduate programs.  She's sailed through that, mastered the technology and the digital distance. She really is, I suppose, the vanguard of people who are becoming lifelong learners who take up university study at any age."