Briaden Bendzsak from Windsor, Canada would look for the cat even during his school lunch breaks once fliers of the missing cat became public 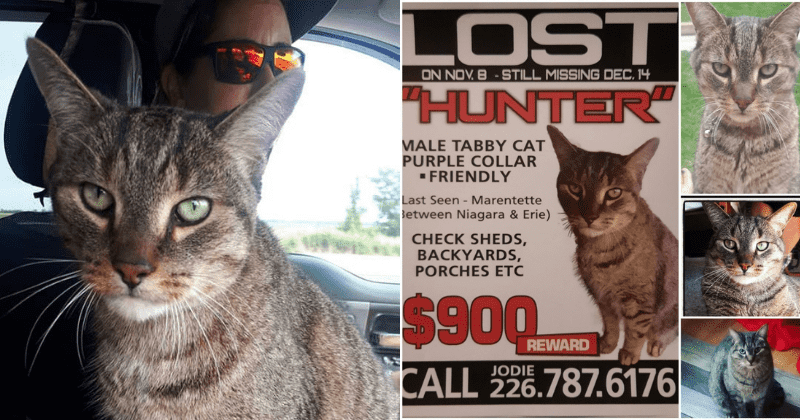 Hunter, a cat in Windsor, Canada was lost for weeks. His owners, Gina Henderson and her girlfriend Jodie Anderson, had let the cat out in their fenced backyard one afternoon in November last year. He ran out and did not return. The couple suspected he was spooked by something. “We went out looking for him everywhere that night and then we waited for him to just wander back because we knew he couldn’t be far. He never did,” Henderson told Windsor Star. She added she and Anderson spent sleepless nights waiting for Hunter to come back. Henderson added, “It was the worst two months. I’ve never felt so defeated before, not being able to find him, because you think you can protect him and find him. We just couldn’t find him. We didn’t give up but … it got cold and you just start to lose hope.”

Hunter the cat had been missing for 74 days before he was spotted by nine-year-old Braiden Bendzsak.https://t.co/4fndi1HbrO

Meanwhile, they also sent out word about their lost cat and printed fliers with his picture and a small reward of $100. But once word got out about the cat, people from the community decided to put in more money for the reward in the hope that the cat would be found sooner. It soon ballooned to $1000. Some even came to the couple's house to give them cash to be added to the reward. Put over the next 74 days, Hunter was still not found. When all hope seemed lost, Hunter's owners got a call from a 9-year-old boy named Briaden Bendzsak about their cat. Henderson said she was "skeptical" about the call. First of all, because it was from a 9-year-old and secondly, there were many cats who looked like Hunter. However, they agreed to check out the lead. Since he saw posters and fliers of Hunter, Bendzsak had been on the lookout at all times.

BRAIDEN went looking for a missing cat on his school breaks, and you'll never believe how the couple and community rewarded him!

He scoured his neighborhood and even looked in yards and under porches during his lunch breaks and after school. Last week on Friday, his efforts bore fruit when he saw a cat that looked similar to the one in the flier. When he tried to pick it up, he escaped and went under a porch. Unable to retrieve him, Bendzsak called the number on the flier. The cat under the porch turned out to be Hunter. “When (Hunter’s) head popped out from under this little porch … it was him and we just couldn’t believe it at all. We’re still kind of in shock,” said Henderson. The Grade 4 pupil at Prince Edward elementary school told CBC he was confident it was Hunter from the moment he spotted him. He said, "I knew it was just the one from the poster," said Bendzsak. He added his owners "were so happy to find him, like so happy."

He said further, "I don't know how to describe it they were just so happy to see it. They were like, 'oh my God, it's Hunter.'" Hunter's owners put the word of the missing cat on social media and also gave a newspaper ad. Even family members and friends contributed to the reward amount and the $100 turned to $900 within no time. Once they made it known that the cat had been found and that a 9-year-old was the "hero", more money was contributed. "I'm super excited that the reward went to him, like it's great," said Henderson. Bendzsak ultimately got a total of $1,025. He said he plans to buy a video game console with some of the money. "I feel like I did a good thing and I should have because I like doing good stuff for people and animals," said Bendzsak.

Hunter was lost for 74(!) days before Braiden found him!

A few reminders from this happy ending:
1) Don't give up! Even indoor cats are resourceful
2) Missing cats are often very close to home! Flyers & signs are key
3) Lost cats tend to hunker down https://t.co/oBhJRDnT2l pic.twitter.com/CBGiRLbWug

"What I learned was to not give up on hopes because you could really accomplish something when you put your mind to it, or in this case, heart," he added. Hunter was severely dehydrated when he was found and was immediately taken to a vet where he is expected to make a full recovery.  "I have to say it makes me very proud that he's such a thoughtful and caring boy for his age, he has a huge heart," said Rachelle Sylvestre, Bendzsak's mom.