"We don't want to perceived as cute kids," said Nolan Davis before adding that he didn't want Black people to feel scared. 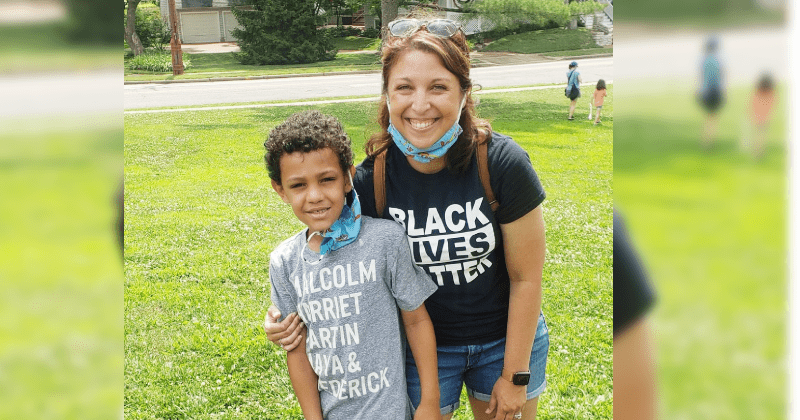 Young Nolan Davis, an 8-year-old boy from Missouri reminded everyone that the new generation of kids offers hope for a better tomorrow. At a time when protests were held in all fifty states across America over George Floyd's death, the 8-year-old boy organized one, to demand change. He, along with hundreds of children, marched down their neighborhood in Kirkwood along with their parents and caretakers. "We are the children, the mighty mighty children. Here to tell you, Black lives matter!" the children chanted as they marched on Saturday, reported CNN.

Davis delivered strong words at the rally. "I'm worried about Black people, like me, getting hurt. Some skin is like chocolate. Some is like vanilla. Some are mixed together like mine. But we're all people," he announced, using a megaphone to address the crowd. "Even though I'm a kid, it's important to speak my voice so people can hear me and know they can share their voice too, just like me." Davis had already visited other protests along with his mother and that's when he got the idea. Davis and his mother, Kristin Davis, addressed the protesters at Kirkwood Park.

"Right after that, he asked me if he could have his own march so that he could let other people's voices be heard," Kristin Davis, his mother, told CNN. So the pair then went about creating a flyer for the proposed march, titled Children's Black Lives Matter March, and shared it on Facebook. There was an overwhelming response from kids and their parents and they all decided to meet at Kirkwood Park. Davis was stunned by the turnout. "We thought that maybe 50 people would be there. But there were like 700 people," he said

And the children will lead us.. So incredibly proud of 8 y/o Nolan Davis for leading us in this social justice movement in support of Black Lives Matter! Children are wise beyond their years and their advocacy for equality ignites hope for the future. #BLM pic.twitter.com/tuJW4IRRlv

Children visited the park carrying placards with phrases like "Stop Racism" and "Black Lives Matter" for their march along the sidewalk. Davis held a poster reading: "Kids can make a change." Davis's white adoptive mother has already held the "talk" with him, reminding him of the things he should and shouldn't do, to stay safe. Kristin has already told that he's allowed to play with a toy gun only in his backyard for the fear it "get mistaken for something else." A 12-year-old black boy was shot and killed by cops in 2014 for playing with a toy gun. Tamir Rice was throwing snowballs and playing with a toy pellet gun in a Cleveland park when a police car passed by the area. Police officer Timothy Loehmann shot the 12-year-old within two seconds of stepping out of the car. He was later fired, reported Vox. Kristin also tells her son to keep the hood of his hoodie down at all times.

Kristin knows her Black son and daughter will never grow up like she did and felt it was necessary to have the talk to protect them. "We're preparing them for when they're older and taller and bigger. When they're not going to be perceived as cute little kids anymore," said Kristin. Eight-year-old Davis doesn't like them and feels no one should feel scared to walk down a street. "I hate it. I don't like how Black people have to feel scared when they're just walking down the street or going for a run," said Davis. He hopes more kids will be inspired by his protest and be the change.

Last week, a father shared a video of his son, a 10-year-old, hiding behind a car as a police cruiser drives by. The video was shared on Instagram by the boy's father Stacey Pierre-Louis and shows the boy shooting hoops and noticing the police card driving up the road. He immediately stops playing and hides behind a jeep, waiting for the police cruiser to pass by before returning to play basketball. It just goes to show the fear that the Police have managed to instill in Black people, including children.