Cop Throws 73-Year-Woman With Dementia To The Ground, Leaves Her With Dislocated Shoulder 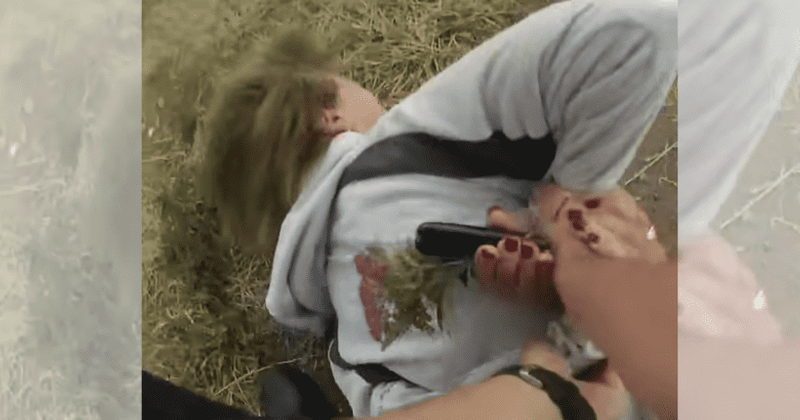 Trigger Warning: The story has a video and details of excessive police arrest that readers will find disturbing

A 73-year-old woman with dementia in Loveland, Colorado was left bruised and severely traumatized after a police officer used excessive force to arrest her. The arrest of Karen Garner, which took place last year, was caught on the cop's body cam and showed her being pushed to the ground and being violently handcuffed by the roadside. The video was released by Garner's attorney and has caused a stir. According to Vice News, her family filed a lawsuit against the Loveland Police department. The brutal and unnecessary takedown left the elderly woman with a dislocated shoulder, a fractured humerus bone, and a sprained wrist.

An excessive force lawsuit was filed against the Loveland Police Department in connection with a June 2020 arrest of a 73-year-old woman with dementia https://t.co/2TQDQ1NLMZ

In response, the Loveland Police Department has opened an investigation into the incident according to a statement on Facebook. The department shared that it had placed the concerned officer  on "administrative leave" pending an inquiry, while another officer who "assisted in the arrest" and the "on-scene supervisor" officer was "reassigned to administrative duties."

Garner had apparently been caught shoplifting earlier at a Walmart whose staff called the cops. The clip showed the officer named Officer Austin Hopp bringing the 5-feet woman to the ground after attempting to detain her. Hopp tries interacting with Garner first. He had apparently been following Garner in his car but she did not notice. Hopp finally gets down from his car and asked Garner why she didn’t stop after he activated his lights and siren.

"You just left Walmart. Do you need to be arrested right now?" he said. Garner looked at the officer but did not answer. She gave him a blank expression and moved away after which Hopp decided to act. He is heard saying, "No, no, no." Then he took her down while putting her hand behind her in an attempt to cuff her. Garner is repeatedly heard telling the officer that she is going home as she lies on the ground holding the flowers in her hands. At one time during the restrain, an onlooker tries to intervene but is sent away. "Do you have to use that much aggression?" the person questions to which Hopp replies, "What are you doing? Get out of here." Another cop named Daria Jalali arrives moments later. The two officers and another cop, a supervisor named Sgt. Philip Metzler lifts Garner back into the police vehicle, as per the lawsuit.

Two other officers targeted in the lawsuit — a backup officer and a supervisory sergeant — have been reassigned to administrative duties, the Loveland Police Department said. https://t.co/LtfSNleOtr

Besides dementia, Garner also has sensory aphasia, the inability to understand spoken and written speech, the lawsuit noted. It also stated that she was not given medical treatment for several hours after she was restrained. "This is not a 'single bad apple' type of scenario. This is a systemic, cultural, deeply ingrained, coming-down-from-leadership type of attitude, where this is not community policing—it’s community terrorism, practically. If somebody’s dumb enough, in their mind, to not capitulate, they’re going to pay for it. Even if you’re an elderly disabled lady," said Sarah Schielke, Garner’s attorney. Garner had slipped out of her home to go to the Walmart store and tried to leave without paying for items that amounted to $14.  She later tried to pay for the items.

She had initially left without paying for $14 worth of goods. Returned to store and tried to pay w/credit card.

Casey Staheli, a Walmart spokesperson, said in a statement, "We stopped the customer after noticing her attempt to take merchandise from the store without paying for it. To protect the safety of our people, the police were called only after Ms. Garner became physical with an associate." Garner was charged with theft of less than $50, obstructing a peace officer, and resisting arrest.