Earlier this year, an animal rights group had revealed that the emaciated elephant was forced to take part in a temple procession. 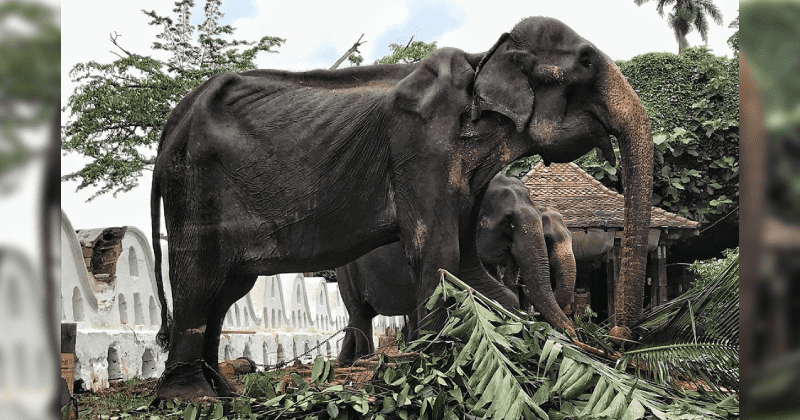 An emaciated 70-year-old elephant that was forced to parade the streets of Sri Lanka has died, according to an animal rights charity. Tikri was one 60 elephants that were forced to march as part of the annual Esala Perahera festival held by a Buddhist Temple in Kandy. There was a widespread backlash earlier this year after Save Elephant Foundation (SEF) released images of  Tikri's heavily emaciated body. Tikri's owners used a parade costume to cover her weak body, according to a report by The Metro. Tikri was also photographed on the floor after collapsing from the torture she was subjected to.

Lek Chailert, the founder of SEF, confirmed in an Instagram post that the elephant had died: The sad news is just out tonight that Tikiri passed away this evening. There is both sorrow and relief here. To think of her brings such pain to my heart. That hard service was her life, and not freedom carries for me a commitment to others who yet suffer. Tikri's own fear and anger and sorrow is now part of that longer memory of her kind which should bear us no affection. Tikiri's suffering has ended, her soul is now free. No more harm can come to her. RIP dear Tikiri. Never look back to this world so cruel toward you and your friends.

In August, Lek Chailert, the founder of Save Elephant Foundation, posted the photos of the tortured elephant. “Tikri is sick. She is old. She is weak. Why is she still tied both legs front and back? Surely she deserves better. Is it fear of her from a lifetime of abuse? Tikiri joins in the parade early every evening until late at night every night for 10 consecutive nights, amidst the noise, the fireworks, and smoke. She walks many kilometers every night so that people will feel blessed during the ceremony. No one sees her bony body or her weakened condition, because of her costume."

Lek Chailert questioned the intention of the religious belief and festival. "For a ceremony, all have the right to belief as long as that belief does not disturb or harm another. How can we call this a blessing, or something holy, if we make other lives to suffer? No one sees the tears in her eyes, injured by the bright lights that decorate her mask; no one sees her difficulty to step as her legs are short-shackled while she walks," said Chailert, at the time.

The temple defended the use of Tikri as part of the procession for the Esala Perahera festival. A temple spokesperson said the elephant's owner had ‘specifically requested’ for it to be included in the procession. "It is an ancient belief that the performing Pooja (worship) to gods by sick or weak elephants has healing powers. Hence, given the digestive ailment of Tikiri, her owner specially requested the Diyawadana Nilame of the Vishnu Devala (temple chief) to allow Tikiri to take part in this year’s procession in hope of curing her. Taking into account the great service performed by Tikiri to the Esala procession, the request was accepted in terms that she is proved to be fit to take the streets after a thorough examination. Given that Tikiri was proved to be fit, she was allowed to take part in a few processions," said the temple spokesperson.

Following the backlash over the photos released by Save Elephant Foundation, Tikri was returned to her keeper. Sri Lanka's tourism minister confirmed to the BBC that the concerned elephant had been stopped from performing or taking part in parades. Tikri's death evoked strong comments on Lek Chailert's Instagram post. One user wrote: Oh our hearts are breaking at this news! We had hoped that Tikiri would have the chance to know freedom and love.