Rajeshwari is from a tribal area in the eastern region of the country and has a condition called ichthyosis that turns the skin into hard scale-like blisters. 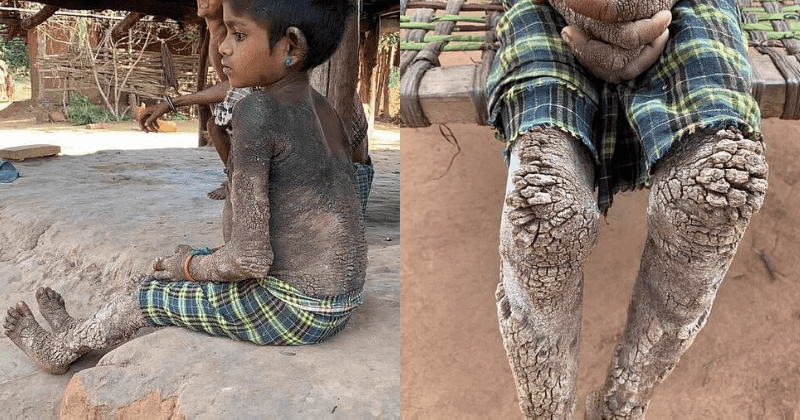 A 7-year-old girl in India is slowly turning into stone owing to a rare skin condition that leads to painful, scaly and hard blisters all over her body. Rajeshwari has a very rare condition called ichthyosis which unfortunately has no cure. While Rajeshwari's condition is not life-threatening, daily life is a pain as the blisters hurt as she engages even in the smallest of tasks. While her face and body are untouched by the condition, the rest of the body suffers the brunt. One can feel her pain just by looking at her pictures.

Please contribute and help A 7 years old girl is suffering from a rare skin disorder which is gradually turning her into a stone.
https://t.co/EsBtqP7O4Y via @milaapdotorg

Rajeshwari's condition is so rare that according to The Daily Star, she is just one of the 24 people in the world who reportedly have the disease. The disease attacks the process of skin regeneration and this makes the skin flaky and hard. Life for her has become a "living hell” as every day is painful for her. Whats makes it worse for Rajeshwari is that she is from a tribal area of the country with dismal healthcare if not any. According to a Milaap, a crowdfunding website that is trying to raise funds for her treatment, "Scutes shaped as barks -- caused due to mutation of genes -- have spread all over her body."

It read, Rajeshwari, hailing from a tribal area in Dantewada district of North Indian state of Chhattisgarh, suffers from a case of ichthyosis that causes reddening, scaling and severe blistering of the skin...Visuals show a heart-wrenching sight of Rajeshwari sitting under a thatched hut with blisters almost covering her whole body. There is no hope for her to be cured. The disease hinders her daily life, making even simple activities such as walking and sitting very painful. According to reports, the rare genetic condition affects very few people and till now only two dozen cases have been reported in the world, the page added.

It added, The rarity of the case makes research difficult and the medicine to control the incurable disease has severe side effects. The website also quoted a number of doctors on the matter who also shared the same pessimism. Dr. Satyaki Ganguly, Associate Professor at All India Institute of Medical Sciences (AIIMS), Raipur, said, “The medical term for this genetic disorder is Ichthyosis Psoriasis and due to very few cases in India, there has not been any major breakthrough in terms of research. Currently, science has no cure for this ailment.”

Dr. Yash Upender, another dermatologist from Dantewada Hospital said she believed the girl suffers from Epidermolytic Ichthyosis which is not a life-threatening disease. She also expressed her hope that with the regular medication, this disease can be managed at one stage.