7-Year-Old Gets Horrific Blisters, Burns & Scars From Henna Tattoo She Got On Family Vacation

Madison Gulliver had got the tattoo from a salon in the 4-star hotel they were staying in during the holiday. The saloon had used a paste that contained a chemical called paraphenylenediamine (PPD) that is used in hair dyes. 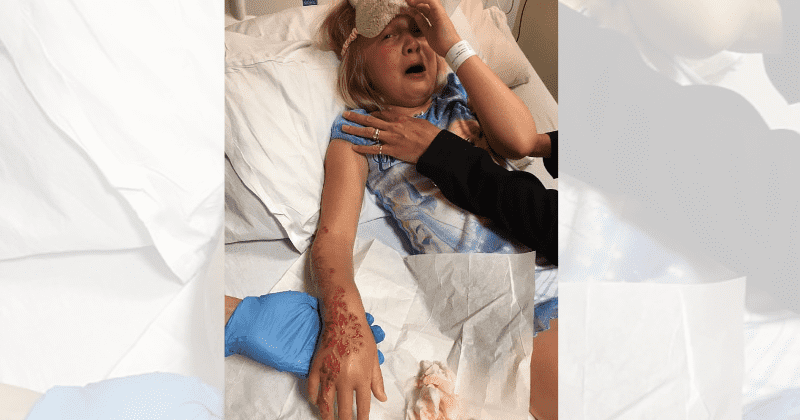 A vacation in Egypt for an English family turned into a nightmare when their daughter suffered burns on her right hand due to a black henna tattoo she got there. It all started when Sylvia Gulliver, 43, the mother of the family had to be rushed to hospital with a gall bladder infection. She was in the hospital for two days until she fully recovered, but that was not the end of it. The Gulliver family's two kids had behaved extremely well during this time and the father, Martins, 50, decided to reward them. Madison, the family's 7-year-old daughter had her eyes on the black henna tattoos, sported on people and tourists there.

After she got permission, she got her hands tattooed from a salon in the four-star hotel they were staying at. It did not seem unusual as it was a place they thought was certified by the hotel. They were wrong. Even Madison's brother Sebastian, 9, decided to get the temporary tattoo, however, he washed it once he felt some irritation and itching.  Madison carried on and felt nothing at first, but soon complained of it also being itchy when they got back to their home in the UK.

The situation only worsened when the itch turned into painful and swollen blisters. The reason for the blisters was the presence of an ingredient called paraphenylenediamine (PPD) that is used in hair dyes. Her condition got so serious that the blisters had to be removed in a specialist burns unit of a hospital. As a result, she's left with scars that will serve as a horrific reminder.

"She is potentially scarred for life after getting a black henna tattoo," said Martins, her father, who is a Royal Mail manager from the Isle of Wight reports Daily Mail.  What's even worse is that the hotel has not owned up to their mistake. Martins said, "The tattoo was done in the hotel's salon and they claim it's not the henna and that it's my daughter's skin. She has blisters from her finger to her elbow and is in so much pain. We were entirely unaware of the dangers and I think they should warn of this in the brochures".

This is what happened when a 12-year-old boy got a black henna tattoo in Egypt - mum's warning http://t.co/ps9V8N0vbL pic.twitter.com/87PR9xkXJf

Girl, 7, is 'scarred for life' after suffering chemical BURNS from a black henna tattoo in Egypt https://t.co/lrQ6rUbWvs

He added, "I think it's partly my fault because I didn't know about it, but also the fault of the salon because they are using dangerous chemicals on children. We would have thought that the travel agents would have had concerns about this. We want to get the message out to other people".  Back in the UK, it took Madison five visits to St Mary's Hospital and many false treatments and medicines to be finally referred to the burns' specialists at the Salisbury District Hospital.

Martins said, "We started to panic. They had never seen it before, and each time we went in they were trying different things but it was getting worse and worse. Doctors tested the liquid from the blisters and discovered that it was a chemical burn. They decided to treat the skin by removing the blisters, so they could access the burned skin underneath. They thought they would be able to soak the blisters and rub them off, but that wasn't possible as they were so thick, so they had to cut them off."

Madison was referred to a scar management unit and has to wear a pressure bandage for at least six months to minimize the scars covering her arm.