The young boy lost half his face after two rottweilers attacked him when he was just 21 months old. 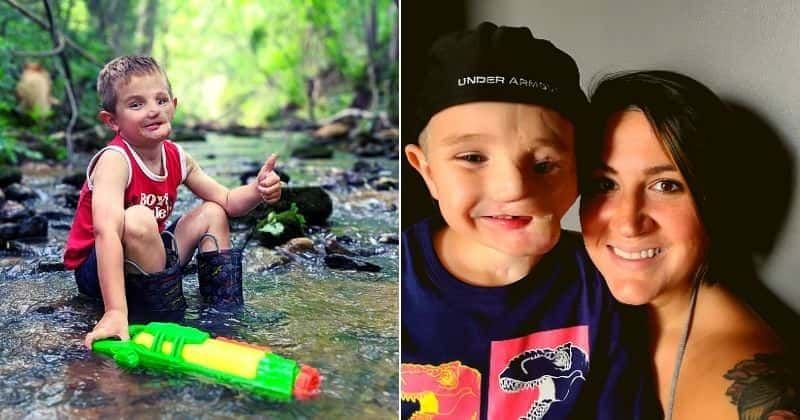 Content warning: This story contains details of bullying and an animal attack that readers may find disturbing

The issue of bullying in schools goes to show how bad kids can escalate. For 5-year-old Ryder Wells, bullying is a daily experience with just about everybody taunting him. when he was just 21 months old, Wells was attacked by two 100-pound rottweilers, reports The Mirror. The dogs attacked him so badly that he had lost his entire right cheek, his bottom eyelid, a broken arm, puncture in the right lung, his teeth were crushed, and he'd even lost 74% of his bottom lips.

Even 50 reconstructive surgeries couldn't help change his situation and he was left permanently disfigured. Brittany, the boy's mom, said that Wells is a constant victim of bullying as strangers often call him a "monster" because of the way he looks. She said, "In the beginning, it was horrible because even adults would stare. For the first year, he had no face on one side because he had two unsuccessful skin grafts." The mom explained the heart-wrenching reality the little boy has to face, "When we go to the park, there's a child who points and screams 'monster' at him before running away." As though that wasn't enough, the little fellow has to listen to strangers pass snide comments at him. "Out shopping the other day someone shouted 'ew' at him," the mom revealed.

"It's hard and it breaks my heart as a parent that after everything he's been through, people aren't always nice over something he can't help, But he is such a fighter, he doesn't let anything hold him back," Brittany continued. The attack happened in 2015 when they were visiting a family friend. Recalling the horrible event, the mum-of-two said, "It happened so quickly. We were eating breakfast and Ryder was back and forth to his toys and back for bacon then he disappeared," she said according to Daily Mail. "I looked out of the window and he was face down in the garden. He had pajamas on and they'd been completely ripped off so he just had a sleeve on. When we picked him up and rolled him, his face was just gone. He'd been around the dogs before and they'd been fine so I don't know what happened." The toddler was quickly airlifted to a hospital and he had to spend 14 hours in surgery.

Reportedly, the medics didn't give Wells much of a chance at survival but being the feisty boy that he is, he wouldn't give up. To everyone's surprise, he didn't just learn to eat and drink but even started attending pre-school and kindergarten. Wells' mom said: "The doctors said they would do what they could but we weren't expecting him to make it. They said it's a miracle that he's still here because he was so small and the injuries were so severe." Detailing the nature of medical care her son endured, she said, "He had to have a tracheostomy because of the punctured lung and they thought that the dogs had bitten so far into his skull that he would be paralyzed."

However,  Wells beat all odds and survived but would still face several days under the knife undergoing surgeries. Reportedly, he will need to undergo procedures until the time he matures. Part of his surgery will also include nose reconstruction and dental work. Brittany is happy that her son has developed a thick skin and is aware of the negative attention he receives wherever he goes, so he isn't bothered by it anymore. "He knows that people are talking about him but he doesn't say much," she told The Mirror. "He wears glasses and a cap and sometimes he'll hang his head to hide his face. I try to deal with it in a better manner so it doesn't affect him so much," she continued. The mom is working to raise awareness against bullying and the effects it has on children. "I just tell him every day that he's beautiful, different is beautiful and it's ok to be different."

The two dogs who viciously attacked the dog were put down by animal control the same day. The family is now raising funds to help with the expensive treatment costs for the boy through a GoFundMe page.