As temperatures reached as low as -30°F, the forest also presented another problem in the form of wolves, bears, and other large predators. 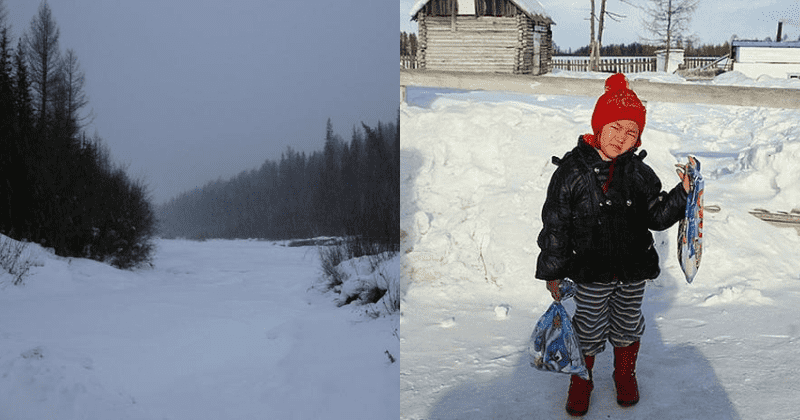 The people of the far North are no strangers to the cold. Living for months together in the ice and snow is fairly normal to them and this is seen especially amongst the Inuit and other indigenous peoples of Siberia. A 4-year-old girl from the latter place had reportedly walked eight long kilometers (five miles) through a dense forest with tons of snow as foliage to seek help for her sick and dying grandmother. The old woman later died of a heart attack, but the young girl ended up braving through the threat of bears, wolves, and temperatures far below freezing as she made the journey.

Brave Girl
We appreciate her hard & noble efforts and We all are proud of her.
Great ! !

Known locally as Saglana, the young girl lived alone with her elderly grandparents near a remote region of northern Russia, The Guardian reported. She woke up to find her grandmother motionless one day and made the journey through extreme conditions to fetch help for her. Due to the old woman's subsequent passing, the little girl's mother is facing a criminal case brought by the Investigations Department of the Republic of Tuva, a federal subject of Russia, which incidentally shares its southern border with China.

At the end of the long trek along the riverbank, the snow would often reach chest-high levels. Due to this, she almost missed the neighbors' house but was spotted by one of the family members, who immediately called medics from the village.  After checking on Saglana, they trekked back to her grandparents' house, where they discovered her grandmother had died of a heart attack.

“Tuva has simply filled up with wolves,” Semyon Rubtsov, head of the regional search and rescue group, told the Komsomolskaya Pravda newspaper. “They eat the livestock – the herders moan about them. She could have easily stumbled on a pack in the darkness.” Saglana told Komsomolskaya Pravda she was not scared making the trip through the forest alone. “I just walked, walked, and got there,” she said. She admitted, however, that she had been cold and had “really wanted to eat”.

What a brave little girl! https://t.co/rxR2xwxvqU

The mother stands accused of leaving a minor in danger, and in the care of the elderly. She also faces an investigation from childcare and custody services, who will be making a similar probe as to why she was left alone with her incapable relatives. The little girl made the journey sometime in February 2017, a time when temperatures in Tuva average -20°F, as per readings from the regional capital. Russian reports on social media also went on to suggest that the forest might have been as cold as -30°F during the girl's journey, which was only recently confirmed by authorities. “She knew that the elderly people were unable to ensure the safety of the child,” the  Russian Investigative Committee said in a statement, according to RT.

https://t.co/5jRlqVBypH
Anyone's heart will melt after reading such stories.

After a medical check-up on the child, they found that she was suffering from general hypothermia. Luckily that was the extent of the diagnosis and the child reportedly suffered no life-threatening effects. Predators that are endemic to the South Siberian forests—through which Saglana traveled—include bears, wolves, and even snow leopards. People on social media praised the girl for her bravery. “Well done, little girl,” “We wish you good health,” “She is worthy of a medal,” “Here’s a hero!” people tweeted in their local languages.

“The future of our [district] lies with these small heroes,” locals from the Tere-Kholsky District told Tuva Online. Her act of bravery has impressed locals, with the outlet writing: “You can’t [easily] impress residents of the remote Tere-Kholsky district with extreme stories about taiga life. Nonetheless, the incident several days ago amazed even the old-timers in Kungurtug, the district center.”