"It is a chance for us to let them return to just being elephants in a situation that is as close to the wild as we can make," Michelle Gaad, the project head said. 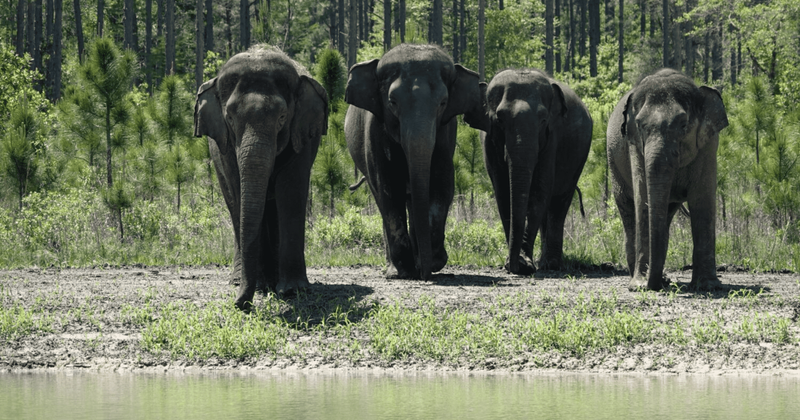 Up to 20 former circus elephants are arriving at a new wildlife sanctuary in Florida. The White Oak Conservation Center announced earlier this month that at least a done Asian elephants had already arrived at the Yulee refuge, located north of Jacksonville while announcing that up to 20 more expected to arrive once the planned 2500-acre space is completed,  AP News reports. Most of the elephants were said to be traveling with Ringling Bros. and Barnum & Bailey Circus before being retired in 2016. Since then they were housed in a variety of places before being house in the Center for Elephant Conservation in Polk County.

"Watching the elephants go out into the habitat was an incredible moment," Nick Newby, who leads the team that cares for the pachyderms, said in a statement. "I was so happy to see them come out together and reassure and comfort each other, just like wild elephants do, and then head out to explore their new environment. Seeing the elephants swim for the first time was amazing." Once the enclosure is complete the elephants are expected to have access to at least nine interlinked areas and habitat types including meadows, woods, and wetlands. The center is also said to be constructing 11 water holes and three barns that will house veterinary equipment.

According to the World Wildlife Fund, the Asian elephant is the largest land mammal in the Asian continent and is second only to the African elephant in terms of size. They are typically seen in dry to wet forests and grasslands in at least 13 countries across South and Southeast Asia including India, Bangladesh, Srilanka, Myanmar, and Cambodia. Though their primary source of food is done by foraging plants, they are quite adaptable as they survive on resources based on the area they live in. Unfortunately, they are endangered with less than 50,000 animals in the world. The sharpest fall in their population was recorded over the last three generations during which at least 50% of them were wiped out due to a variety of reasons including habitat loss and poaching.

A vast majority of the remainder of the species are held in captivity and are used for agricultural purposes, logging, and tourist attractions, mostly in India, Thailand, and Myanmar. These elephants and trained and forced to acquiesce through brutal fear-based methods that emphasize punishment, inflicting pain, and even drawing blood. Fortunately, the conservation center at White Oak will give the 35 gentle giants a new lease of life as they get to frolic in the 17,000 acres (6,880 acres) of land. Owned by philanthropists Mark and Kimbra Walter, the center is already home to several endangered species including okapis, rhinos, zebras, bongos, cheetahs, and dama gazelles.

"We are thrilled to give these elephants a place to wander and explore," the benevolent owners of the facility and also the driving force behind The Walter Family project said. Michelle Gaad, who oversees the project, told National Geographic: "It is a chance for us to let them return to just being elephants in a situation that is as close to the wild as we can make. Elephants are such amazing creatures, and we are pleased to give them a place where they will flourish," she added. "We are excited to watch them adapt to the great outdoors, tasting new plants, exploring new areas, experiencing new things."