The early hours of April 8 have much in store for ardent stargazers in Europe, the U.K., and even parts of North America. 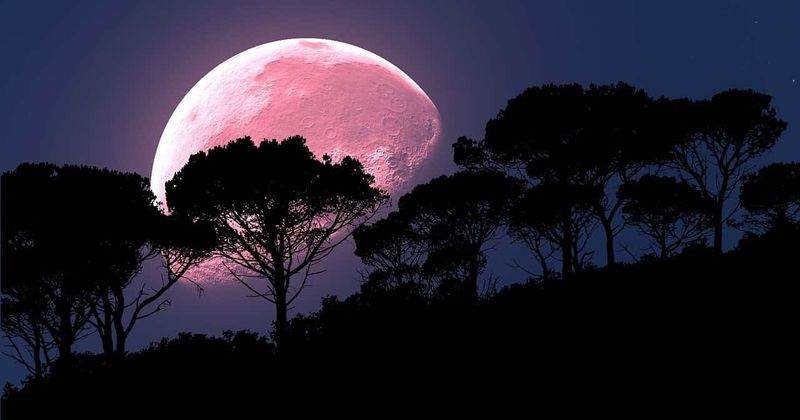 April is here and we are finding new ways to be excited about spring that lies ahead. Considering that most of our outdoor plans are postponed or canceled due to the ongoing pandemic, we best look to the skies for some entertainment. There is something special about to happen next week and you are in for a real treat. The night (well early morning to be precise) will be illuminated with the magical phenomenon of a 'Pink Moon'.

'Pink Moons' are known to commonly occur during the full moon phase in the month of April every year, reports the Sun. Though the moon isn't actually going to appear pink like a crayon, the celestial object will appear to be glazed with a pale orange look, making it quite significantly distinct from other full moon phases when it's mostly a crystal clear white. Be prepared to gorge your eyes ought on this fine beauty as it's a particularly special one this time as it will also be a Supermoon, which is much bigger and brighter than an average full moon.

So when and where can this phenomenon be witnessed? Well, stargazers in Europe, the U.Km and even the eastern part of North America should be able to glimpse this fabulous 'Pink Moon' in the early hours of April 8, before dawn. The 'Pink Moon' is aptly named from the pink spring wildflowers called wild ground phlox that frequently blossom in the United States around the same time as the full moon in April each year. "Herb, moss pink, or wild ground phlox, is one of the earliest widespread flowers of the spring. As the name infers, the flowers are pink in color, thus the name for April’s full moon," explains Farmer's Almanac. "The fourth full moon of this year goes by several different names such as 'Egg Moon,' because of the spring egg-laying season; 'Full Fish Moon,' as this was the time that the salmon swam upstream to spawn; 'Sprouting Grass Moon,' because new grass starts appearing during this time.

The Super Pink Moon will rise on Tuesday, April 7. It’ll be visible after sunset, The moon will appear full to the naked eye for a couple of days#witchcraft #wicca #moon #superpinkmoon #wiccan pic.twitter.com/1txwwUPAZy

You best be marking your calendars for the coming Wednesday, April 8, as it conveniently falls just four days before Easter Sunday, which is on April 12, according to the Telegraph. Farmer's Almanac says it will begin on April 7, 2020, at 10:35 pm EDT. This unique full moon is going to be the largest Supermoon of 2020. Now, what exactly causes this moon to be so unique in its shape and display? As per the Farmer's Almanac, Supermoons are caused by the shape of the Moon's orbit, which is an ellipse or oval in shape and not a perfect circle. Every month, when the moon orbits the Earth, it reaches a point farthest from our planet called apogee and a point which is closest called perigee. So, when the Moon reaches withing 90% of perigee it will appear bigger and brighter than your average full moon. Supermoons are 7% larger and 15% brighter when compared to an average full moon, and it is surely a sight to see.

Supermoons are known to frequently appear as much as 14% larger than 30% brighter than a regular full moon. We just witnessed the 'Worm Supermoon' illuminating the skies last month — one of four full moons said to reach the 90% threshold and will occur this year from February to May, according to NASA. The Supermoons in March and April have been considered to be equal in terms of their appearance and luminosity. This month's supermoon will be 0.1% closer to the Earth than the one in March, and will also mark 2020's brightest (0.5% brighter) and largest Supermoon!