Most of the trees over at Big Basin Redwoods State Park survived the blazing embers amidst fears of being destroyed. 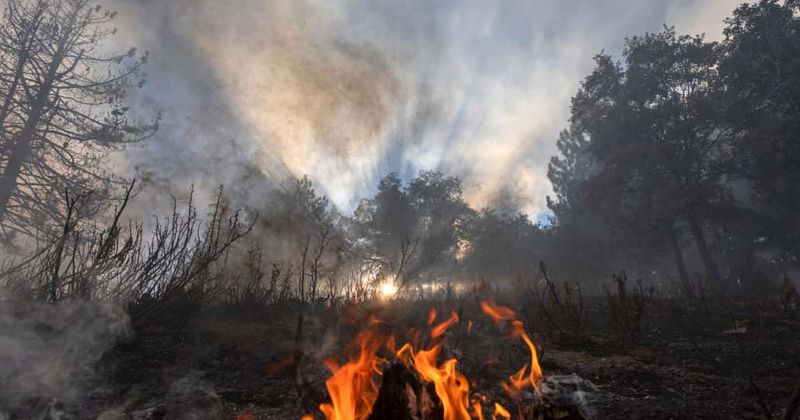 As the recent surge of wildfires in California have spread across a million acres in the state, fears of it spreading further are only natural. California's oldest state park was under threat last week, and many trees including the redwood groves were predicted to be burned. Some of these ancient trees are over 2,000 years old and among the tallest living things on Earth. Luckily, most of these giant trees had somewhow withstood the blaze as they were confirmed to be safe, Assosciated Press reports.  "That is such good news, I can’t tell you how much that gives me peace of mind," said Laura McLendon, conservation director for the Sempervirens Fund, an environmental group dedicated to the protection of redwoods and their habitats.

I'm just reading news reports that "Big Basin State Park" is completely gone, but the writing acknowledges that goes for the buildings but nobody has been able to go in and assess the trees yet.

McLendon wa surprised that they were still alive as Redwood forests "are meant to burn." The historic park headquarters, however, is gone, and many small buildings and campground infrastructure also perished. The fires swept through the part from about 45 miles south of San Fracisco. "But the forest is not gone," McLendon said. "It will regrow. Every old growth redwood I’ve ever seen, in Big Basin and other parks, has fire scars on them. They’ve been through multiple fires, possibly worse than this."

Hundreds of wildfires are burning in California, tens of thousands of people are under evacuation orders, and the governor is calling in help from 10 U.S. states, Canada and Australia to tame the blazes that have scorched an area the size of Rhode Island.https://t.co/JODmfHTLfw

If you are considering replying to this tweet to explain why it was ridiculous to even worry about the redwoods, I beg you, don’t.

Many people were concerned. Their fate wasn’t known for sure. Facts were unearthed through reporting (and hiking).

Those trees that withstand wildfires, storms, and winstorms, have the amazing ability to regrow. Among them that survived is a particularly special one called "Mother of the Forest." This tree used to be the tallest one in the forest at 329 feet. During a storm that took place, its top portion broke off and a new trunk sprouted where the old growth had been. Those that fell would end up feeding the Earth and nursing new redwood trees. There are several forest critters and insects that thrive under these fallen logs. The state park was only recently reopened after the COVID-19 pandemic-related closures, and is now closed again because of the fire. The road to the park is now blocked by several large fallen trees, some waist-high, with some embers still blazing all over the vicinity.

California fires: Research from other fires shows that most of the burned redwood trees at Big Basin and other parks will recover soon, experts say, sprouting green after the winter rains. "These trees are amazing," said one scientist.https://t.co/fuyM3hzgLv #CaliforniaFire

"The forest, in some ways, is resetting," McLendon said. Though there is a great work to be done in rebuilding campgrounds, clearing trails and handling the damaged madrones, oaks and firs, she is confident that Big Basin will recover. Chris Spohrer, State Parks District Superintendent said that he was pleased to know the redwoods had survived. "The reason those trees are so old is because they are really resilient," he said. An assessment team was sent to check on the buildings first and would be inspecting the trees in the coming days.  According to NASA, the two largest fires that are still burning the state started with lightning strikes in northern California.

This viral tweet with 7.5k retweets by @dwallacewells claiming that fires have destroyed ancient redwoods is misinformation

David, you should delete it, apologize, and come camping with me in our redwoods so you can learn some basic forest ecologyhttps://t.co/QTa4cUz2pf

The LNU Lightning Complex Fire, in the northern Bay Area and Central Valley, is the second-largest inferno in the state's recorded history. The SCU Lightning Complex Fire, largely east of San Jose, is now the third-largest fire in the state's history. By Monday morning, the LNU fire had scorched more than 350,000 acres and was about 22% contained. The SCU fire has burned more than 347,000 acres and was about 10% contained. "The size and complexity of this fire is not one we've seen in times past," Cal Fire Chief Shana Jones said. California Governor Gavin Newsom has deemed that the coming week is crucial in addressing and suppressing the flames. "My personal point of view is the default should be in-person education as long as it's safe, and as long as we can guarantee the safety of not only our children, but the safety of paraprofessionals and the safety of our teachers," the governor said.

According to scientists, 4.4M acres/year of Calif. burned before the arrival of Europeans

The annual area burned has declined over 80%

Fire is often good not bad!

Disclaimer: This is a developing story, and we’ll update as we learn more. Information about the California fires is swiftly changing, and Shared is committed to providing the most recent and verified updates in our articles and reportage. However, considering the frequency in developments, some of the information/data in this article may have changed since the time of publication