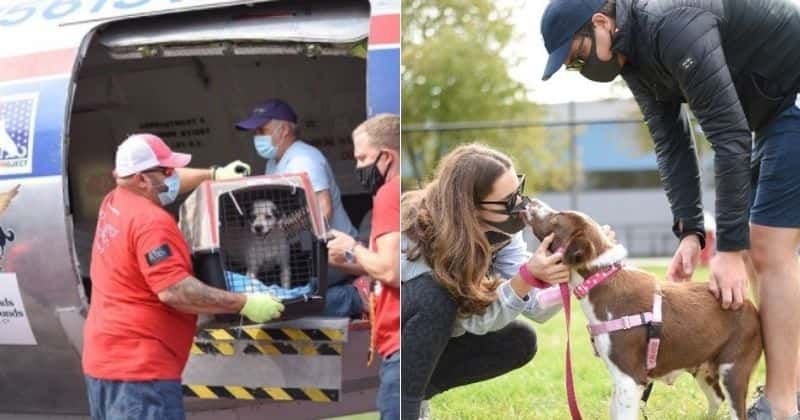 It's a rough life for animals living in the streets and overcrowded shelters, but there's a silver lining. Up to 130 cats and dogs from Puerto Rico were safely placed on a plane which would take them from a life of uncertainty to their eventual forever homes to live with their warm and loving families. This initiative was undertaken by The Sato Project who collaborated with Wings of Rescue and Greater Good Charities. Together, they chartered a plane for the dozens of pets ready for adoption, and a new chapter of their lives.

Thanks @people @PEOPLEPets for featuring our freedom flight!130 Dogs and Cats Flown from Crowded Shelters and Life on the Streets into Forever Homes https://t.co/vxJPMzEHKK

They put these animals on a plane and flew them from Puerto Rico to New Jersey where many of the animals were happily greeted on arrival by their new families. The cats and dogs that didn't find their homes just yet are available for adoption at Humane Pennsylvania, Broward County Humane, and Kent Animal Shelter. Aside from loading the plane's cargo with these furry and feline passengers eagerly looking for homes, the chartered flight also had several dogs from The Sato Project's No Dog Left Behind program, according to a release, reported by PEOPLE. This particular program is aimed at reuniting pets and their owners in the event that they are separated due to natural disasters.

It has officially been one week since 130 satos and gatos started their new lives last weekend. From the comfy beds, new toys, to the endless love - so far, we definitely think they approve. #dreamscometrue #satostrong #adoptdontshop pic.twitter.com/R66rSDbkg0

"Since its inception in 2011, The Sato Project has largely focused its efforts on a place unfortunately known as 'Dead Dog Beach' in the municipality of Yabucoa, one of the island's poorest. We have rescued over 5,000 dogs to date, rehabilitated them with the highest standards of veterinary care, and placed them in loving homes in the mainland U.S. We are addressing the underlying causes of overpopulation, abandonment, and abuse through community outreach and low-cost spay/neuter and vaccine programs," the organization wrote on their website.

We are so grateful for all of our transport volunteers in both PR & NY. From the heavy-lifting, the clean-up duty, to the special attention that ensures each & every sato is handled safely & lovingly - thank you to all our team members for making our life-saving work possible. pic.twitter.com/arBGB5GQrE

"To date, we have spayed/neutered over 7,000 dogs and cats. Since the devastation of Hurricane Maria in 2017 and the recent earthquakes of 2020, The Sato Project has also expanded into disaster relief efforts, including distributing humanitarian and animal emergency supplies, pulling dogs from overburdened municipal shelters with 90%+ euthanasia rates, and reuniting families with their beloved pets via our No Dog Left Behind program," they added.

Wings of Rescue meanwhile is a charity that was founded in 2012 to fly endangered pets from high intake and/or high-kill shelters to no-kill shelters where they can be adopted into loving homes. As of today, they have flown 100+ flights carrying 7,161 pets (4,868 dogs, 2,276 cats, 13 pot-bellied pigs, 3 rabbits and one Cockatoo) to safety. They have also flown in over 140,000 pounds of humanitarian aid into the Bahamas during times of crisis.

This makes me so happy 😭 bless all of the good people in this world.

Puerto Rico is well known for bearing the front of many a natural disaster, especially hurricanes from the Atlantic. Puerto Rico is also recovering from the fall out that was caused by routine earthquakes and hurricane threats to the region. By pulling pets from overcrowded shelters in Puerto Rico to be adopted,  the charter also freed up room in those shelters for animals in need, including those affected by the island's natural disasters.

The Humane Society of Puerto Rico estimates that the country's stray animal population has spiked with up to half a million stray dogs and 1 million cats. Before the island's Humane Society was established in 1958, the government dealt with the overpopulation of animals on the island by euthanasia. Luckily, there are groups and charities that are actively fighting to rescue many animals and give them a better life.