The stand-off, which happened in Michigan, lasted for close to four hours. Thankfully, the man didn't jump. 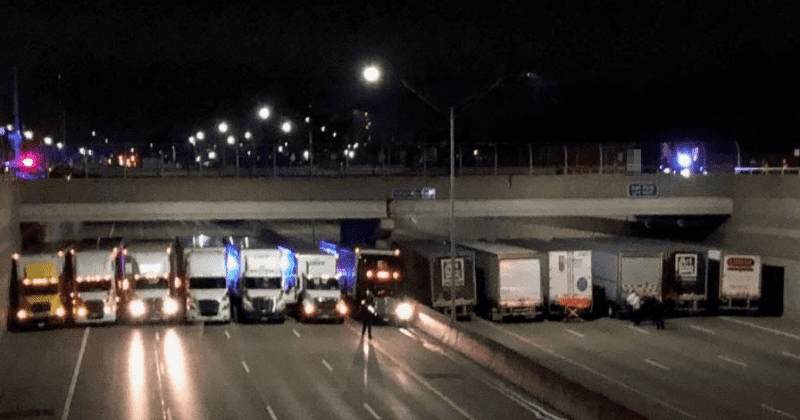 It was a relatively normal day on April 24 for the Huntington Woods Police Department until they received a distress call around 1 am, stating that an unidentified man was standing on the edge of a local bridge and was almost ready to jump. A fall would mean one thing for the man - painful injuries followed by potential death. At least that would have been the case until these truck drivers decided to change the outcome. As soon as they heard of the distress call from the PD, they raced to the scene for assistance and within moments, they lined up their trucks just under the bridge, to provide a relatively safe landing space if the man jumped. Thankfully, he didn't.

This photo does show the work troopers and local officers do to serve the public. But also in that photo is a man struggling with the decision to take his own life. Please remember help is available through the National Suicide Prevention Lifeline at 1-800-273-8255. pic.twitter.com/RBAlCIXT1o

The line-up was by no means an exceptional feat, according to Sergeant Jason Brockdorff of the police department, who says the drivers were prepared for the exact scenario. What was impressive, however, was the sheer number of trucks that pulled up after the call. Speaking to Detroit News, Brockdorff said: "That's a practice we use if we have a jumper. We try to do it every time, to lessen the distance someone would travel if they were to jump. Fortunately, that didn't happen." The stand-off lasted for close to four hours and dragged into the early morning hours. However, as the 13 trucks pulled up, police had better leverage to comfortably negotiate with the unidentified man to step down.

You can also call a loved one, member of the clergy or 911. There are so many people that can help you make the choice to get help and live! It is our hope to never see another photo like this again. pic.twitter.com/cDfm1CK1BZ

Once he stepped off the bridge on his own, he was sent over to receive medical help to deal with the situation. A trucking industry spokesman also shared his thoughts on the efforts of the drivers and said he was proud of them. Speaking to the outlet, a spokesperson for the American Trucking Association, Sean McNally said: "The photo makes us so proud and shows quick thinking. It also shows how our industry works with law enforcement to keep our highways safe and the quality of people we have driving.” McNally also added that there are over 3.5 million professional truck drivers on the US roads and that he believes anyone of them would have stepped up to the task if asked.

God bless the Michigan State Police and the truckers!

The police department also shared a photo of the trucks lined up. The photo has since gone viral with hundreds of people commending the truckers for their commendable work in saving a life. On Twitter, a user named V Spell wrote: "What a wonderful idea! Thank you for always being there, even when no one has a camera to document your compassion." Rebecca Byrnes added: "This is breathtaking. Thank you to all of you. This gives me hope. I just hope the poor man gets the help he needs so that he'll recover and feel good about living again." Mike Ecker added: "What an incredible show of human kindness for all of these truckers with their deadlines etc. to take the time to help save this person's life. God bless them and the Michigan State Police! Hopefully, the man will get the mental help he needs so much."

Can you imagine the amount of pain he must be going thru where jumping off the overpass made sense to him? I hope he gets the help/support he needs to end the pain & live a better life. Truckers are heroes.

Trucker John, a fellow trucker, was also impressed by the work his community did to save the life of an unknown stranger. He wrote: "Thanks to those officers who helped but also give truckers credit as you can see in this picture that expressway was blocked due to their efforts." Instances such as these are a regular occurrence in our society and they go to show that despite all the horrible things happening in the world right now, there still are tons of great people living among us.

Outstanding job making someone’s possible final day instead a day of new hope. Well done! Have a safe duty day out there. 🇺🇸