trending celebrity people lifestyle news animals
12-Year-Old To Graduate High School and College in Same Week: "I'm Having The Time Of My Life"

12-Year-Old To Graduate High School and College in Same Week: "I'm Having The Time Of My Life"

Mike Wimmer has completed four years of schooling, two years of high school and a two-year associate's degree in ONE year! 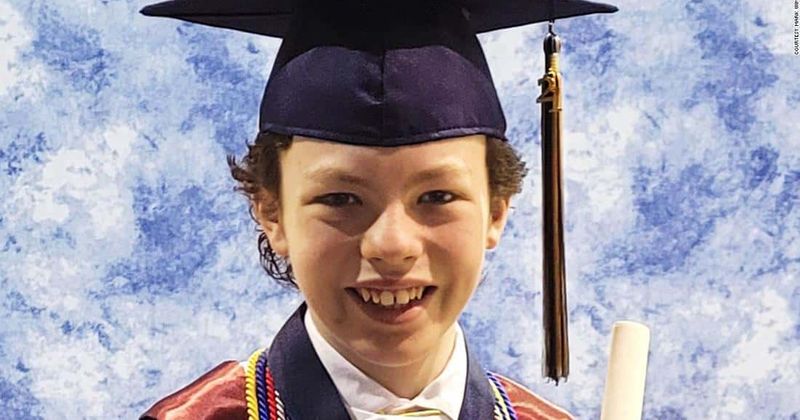 A North Carolina 12-year-old is ready to mark two major life accomplishments, that the rest of us take years to do... in a matter of days! Meet Mike Wimmer, who is getting ready to graduate high school and college in the same week. Wimmer, of Salisbury, is set to graduate from Concord Academy High School on May 28 and Rowan-Cabarrus Community College on May 21. The preteen has a 5.45 GPA at Concord, where he's the valedictorian, and a 4.0 GPA at Rowan-Cabarrus, according to CNN. The prodigy has completed four years of school in one year, as well as two years of high school and a two-year associate's degree, all in a year! "A lot of people think I've given up my childhood or somehow lost it," Wimmer told CNN. "And I say to them that I'm having the time of my life."

Mike Wimmer is just 12 years old, but he's already set to graduate from college with a perfect GPA, all while finishing high school at the top of his class. 👏👏👏 https://t.co/ZbGNymBRkY

And that's not all. He is also the founder of two tech startup companies called Next Era Innovations and Reflect Social. According to Next Era Innovations website,  Mike T Wimmer is "the founder and creative mind behind Next Era Innovations. Mike is a profoundly gifted forward thinking 12-year-old who has his goals set to redefining the future. Even at this young age, Mike has an extensive understanding of the coding and robotic world. He sees the next era in history beginning now with major advancements in the symbiosis between humans and AI robots."

NBC affiliate WCNC reported that his interest in technology began when he was just a baby. "I've always been drawn to the science of technology, but I am a very well-rounded student and do exceptionally well in all subjects. I went through all of the grades in school at a faster pace," Wimmer added. "I'm like a sponge, I take in knowledge very fast." Now, he is working on how to put his ideas on paper. "I can have the greatest idea in the world, but it's no use to anyone if I can't convey it in a way those can relate to it," Wimmer explained with insight.

12-Year-Old N.C. Boy to Graduate from High School and College in Same Week: 'The Time of My Life'​ https://t.co/XANGvsSl9O

At just 5 years, the young genius said he "jump-started everything" by honing a serious interest in computer programming. He's also learned a lot of stuff on his own, he admitted. "I've grown from there to now learning about a dozen languages," he told WCNC. "Everything that I know is self-taught. So trial and error and online videos and everything." As for his parents, they couldn't be prouder,  "That social and soft skill side of him I think, is the part that's really grown and really impressed us even much more than just the academics for sure," dad Mark Wimmer said. Added mom, Melissa, "He's worked hard to reach his goals. When he had obstacles in his way, he figured out a way around them."

No better way to introduce my newest venture, HORIZON OS, than at my high school science fair! I am excited for the future and the tremendous potential this OS has in changing the lives of so many. Finding my way to change the world! #STEM #sciencefair #changetheworld. pic.twitter.com/dLdR4NTiVm

But apart from his academic brilliance, Wimmer is still a kid and is comfortable doing "normal kid stuff". It's hard to believe that someone who is consulting with the military about the future of artificial intelligence is just 12-years-old! "I enjoy basketball, swimming, building Legos, sim racing, playing with Hot Wheels, and attending IMSA Sportscar races," Mike told Southern Living. "I am still a kid and still do 12-year-old things. I pride myself on being able to have a business Zoom meeting one minute, and the next, logging a couple of miles on my knees while playing with Hot Wheels."

He will also graduate from college with a 4.0 GPA. https://t.co/EykbgghM3D

So, what are his future ambitions? The 12-year-old  plans on pursuing a career in robotics and computer programming. Wimmer hopes to one day invent something that will improve people's lives, including the lives of those in the military. "I take great pride in using my skills in support of our military men and women," he said. "If what I can provide protects or gives an advantage to our troops and brings just one soldier home safely to their family, then my efforts are well worth it."