Lydia Denton from North Carolina calls her invention 'Beat the Heat Car Seat'. It would cost around $50 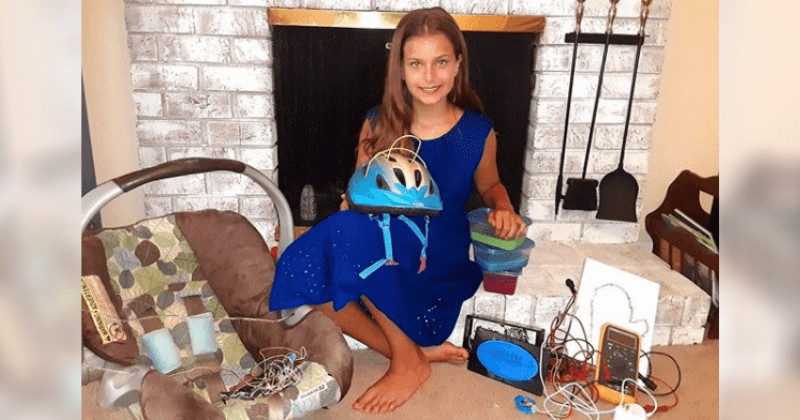 A 12-year-old girl is determined to stop hot car deaths in America this year. Lydia Denton from North Carolina has invented a contraption that will help save many kids from dying of heatstroke in cars. The invention Denton has made will measure the temperature in the car and when the inside of the car reaches 102 degrees, it alerts parents and emergency officials.

She has been declared a winner of the CITGO's Fueling Education Student Challenge and even won $20,000 for her invention. The girl may be young but she is already on her way to save thousands of lives.

Speaking to PEOPLE, Lydia said, "Winning the money was cool, but I really care about saving lives. My first thought was, 'Maybe no babies will die this summer!'" The little girl was moved by news reports of how babies were being left behind in cars on hot days, which would often lead to their death. The first hot car death this year happened on April 25, when a 4-year-old left home and climbed into a vehicle without his family noticing. According to the National Highway Traffic Safety Administration, there were 52 hot car deaths in 2019 and a record of 53 deaths in 2018.

*Sigh* The number of child hot car deaths for 2020 is currently 8 according to https://t.co/HQCVFC5PTl.

The heat will be here for a while so please be a responsible parent/caregiver! pic.twitter.com/zxdUuKjexu

"I did some research and saw that it happened a lot and that it wasn't just neglectful parents," Lydia said. "I got really upset and wanted to try and help." So she invented the "Beat the Heat Car Seat."

She explained that the pressure pad in the seat will begin to record temperatures inside the car when at least five pounds of pressure can be felt on the seat. As soon as the temperature reaches 102 degrees, an alert is sent to parents and first responders reported WITN. The invention will be portable, so it can easily be transferred to other car seats. According to Lydia, it would cost around $50.

12-year-old Lydia Denton created the "Beat the Heat Car Seat," that alerts parents and emergency officials when the car gets too hot: https://t.co/ydvfiAEtSv pic.twitter.com/l2iX8u5GEC

"At first, I thought about raising money for the families, but that wouldn't fix the problem. I wanted to invent something that could prevent the deaths from happening," she said. "My mom has a saying: 'Stop complaining and do something about it.' Complaining or being sad doesn't solve the problem, we have to take action to make a change."

She has been working on the product for two years now. After winning the competition, she is now in talks to get the seat mass-produced and into the market. "That's why I tried to enter it in as many contests as I could and really get it out there so it can be something that will save lives and be something that most people can afford and be able to get," she told Good Morning America.

“Complaining or being sad
doesn’t solve the problem,
we have to take action
to make a change.”
-Lydia Denton #quoteoftheday #change #action pic.twitter.com/EK80wTdHQe

When Lydia heard that she had won the award, she was shocked even though she had already won several competitions this spring. "I was so excited. I didn't think I would win. So many kids invent so many things and I know that my ideas aren't always the best," she said. She will be saving the cash award as part of her college fund. She will also be sharing it with her 14-year-old brother and 10-year-old sister, who also helped her with the invention. "Once I made the prototype, I called in my brother, who is really great at coding, and my sister, who's a good peacemaker," she said. "When we would get frustrated, she would help bring us snacks and she helped us design it to make it better."

The proud mother of the three kids, Covey Denton, who is also a science teacher said, "Kids don't know what impossible is. They dream so big. [Lydia] has proven that to me time and time again and told me, 'It's not impossible, Mom, you just think it's going to be. I can do this.'"

She also had a message for other aspiring kids: "Don't think that you have to accept things in the world. If there is something that bothers you, think of ways to make it better! Sometimes that means changing your attitude, but sometimes that means an invention. You've got to push and learn and you can't give up!"