Caleb Anderson could do fractions when he was just 2 years old and is now preparing to study aerospace engineering at 12. 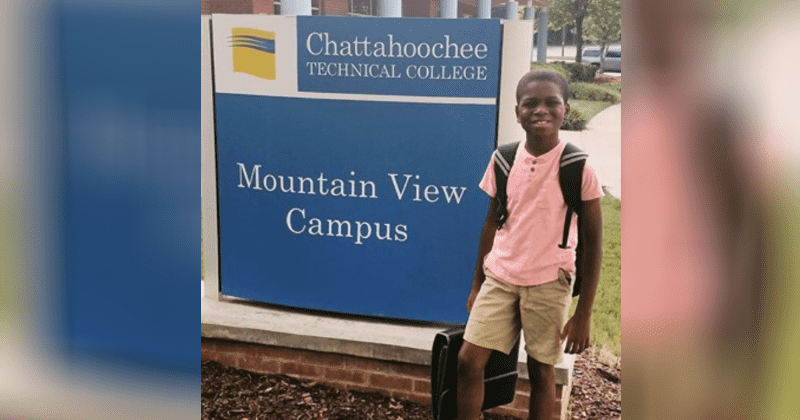 The Georgia Institute of Technology, or Georgia Tech for short, is well-known for enrolling smart kids for their engineering courses. However, they now have a new application from 12-year-old Caleb Anderson, and you can bet they were as surprised as us. Caleb began doing fractions at the age of 2 and is applying to college at 12. "I'm not really smart," he told correspondent Mark Strassmann. "I just grasp information quickly. So, if I learn quicker, then I get ahead faster." This elite engineering school fell over itself recruiting him. Caleb saw the labs and met the school's president, Ángel Cabrera.

“Caleb Anderson is well on his way to getting a degree by the time most kids his age are starting their freshman year of high school.” — 12-year-old Georgia boy begins sophomore year of college https://t.co/1YT538rQqW

Professor Mark Costello, chair of Georgia Tech's School of Aerospace Engineering, told Strassmann, "He's a perfect candidate to come into our program and be very successful. "Is his admission guaranteed?" Strassmann asked. "I would expect that he would be admitted, for sure," he replied. Strassmann asked Caleb's parents, Claire and Kobi Anderson, "What's it like to be touring a college when your kid is 12?" "I don't think anything Caleb has done has been normal for us," said Claire. “When Georgia Tech reached out to us,  it was a dream come true," Kobi said. “By nine months old, he was able to sign over 250 words, and by 11 months old, he was speaking and reading,” his family described. “As we started to interact with other parents, and had other children, then we started to realize how exceptional this experience was because we had no other frame of reference,” Caleb’s dad Kobi explained.

Last week, Caleb Anderson and his parents toured the @GeorgiaTech campus and #GTaerospace labs to see what it would be like to be one helluva aerospace engineer.🐝 https://t.co/qceMe59vLU

The extraordinary nature of Caleb's genius is something that researchers will be analyzing in the years to come. At the tender age of nine months, he went on to learn sign language. He started reading by his first birthday and could do simple math problems by the time he was two. Caleb said, "I have this distinct memory of going to a first-grade class and learning there, and everyone was way taller than me, because, you know, I was two. I could barely walk!" Middle school was awful. "The kids there, they kind of looked down on me, they treated me like I was an anomaly," Caleb said. "And I kind of am."

Caleb Anderson, a 12-year old gifted boy from Georgia, has already finished his first year in college and has just started his second year. He is majoring in Aerospace Engineering at Chattahoochee Technical College.https://t.co/pMTguR9GUO

So now, Caleb has been studying aerospace engineering for a year at Chattahoochee Technical College in Marietta, GA. He was all set to graduate in two years provided he remained at the college, but his parents felt that he would be better off at a university that specializes in his field of interest. Claire said, "We want him to be in an environment where he is accepted and not tolerated." Strassmann asked, "If he comes to Georgia Tech, he's not rushing a fraternity?" "No! We're definitely protecting him," Kobi laughed. His mother went on to add that their hopes and expectations for Caleb go far beyond grades, and they want "to make sure that when he is an adult, he'll make a great husband, a great father, a great friend one day."

Whip-smart kids apply every year to Georgia Tech. But no one like Caleb Anderson. He's 12 years old. https://t.co/VZA1QIkqYO

Strassmann asked, "Does it ever occur to you, you know, 'I'm looking at college and I'm 12 years old!?" Caleb replied, "This is my life. This is how I am. And I've been living this way my whole life." “It's been encouraging to be a voice for the gifted community,” Claire Anderson said. “It’s just kind of mind-blowing,” Kobi Anderson said. “I am grateful I videotaped Caleb when he was young because I don’t think people would have believed us that a 2-year-old was reading the United States Constitution,” Claire said.

This is AMAZING! 12yo Caleb Anderson is headed to COLLEGE for aerospace engineering. His #BlackBoyMagic is REAL!! Can't wait to see you going to space one day, Caleb! 🚀 https://t.co/31MHoAHsn2