Annie Berry has led a long and interesting life. On January 18, she turned 105 and celebrated with family, including her week-old great, great granddaughter Olivia. 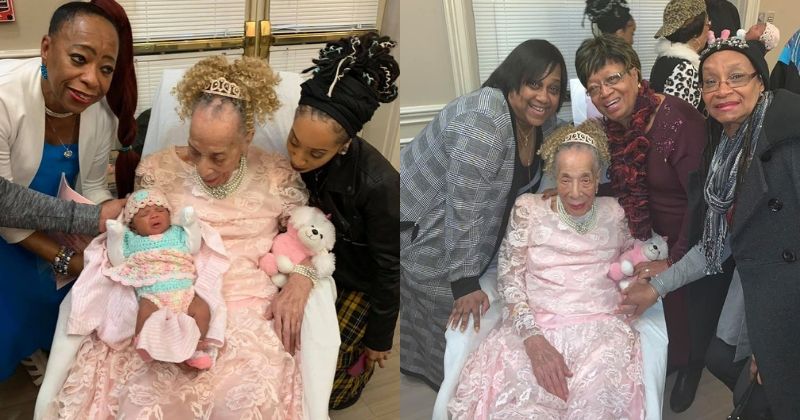 Everyone likes to celebrate birthdays, but we can all agree certain birthdays are more special than others, particularly ones that mark important milestones. Like your sweet sixteen, or your 18th birthday that marks adulthood, then there's 21, 30 and so on. One family recently got to celebrate a  special person on a very special birthday. Annie Berry turned 105 on January 18 and celebrated with family. Five generations posed for pictures together as a very proud Annie Berry got to hold her great-great-granddaughter Olivia who was just a week old and arrived just in time for the celebrations on Thursday. It is rare that five generations get to be in each other's presence and reminisce. As for Berry, how exciting it must have been to have the honor of meeting her great grandchild's baby the day she turned 105.

The birthday celebrations were held at the Genesis Larkin Chase Center in Bowie. Berry has lived through history, picking cotton, shucking corn, and milking cows, shouldering the heavy burden of her race during a time when segregation and inequality were commonplace. She was born in Meridian, Mississippi, in 1914 and has seen much in her time on earth. One of which is the nation being led by a black President, something she always believed she would have the good fortune of seeing before she breathes her last. Her granddaughter Annie Sewell told WUSA9, “She said before I leave this earth we will see a black president. I didn’t think it, but it came to pass."

When the Ku Klux Klan was getting increasingly agitated and growing in numbers, like many other people of color during that time, Berry decided to flee to a safer part of the country. Berry found herself migrating to North Carolina where she found work as a caretaker for a white family, a common vocation for women of color at the time. However, when she finally retired, Berry did so as an administrator for a school system. Berry's is a tale of great adventure, tenacity and courage and one that she will hopefully get to tell her great-great granddaughter Olivia herself.

After her retirement, Berry moved to the D.C. regions so she could live with family. She currently enjoys the honor of being the matriarch in her family, all of whom appear to be quite fond of her. Her hope for the newest member of the family is, "for her to be kind and loving and do what mother says to do." It is incredible that she is able to fully enjoy these moments with her lucidity intact at her age. Berry firmly believes that her extended days on earth and the blessing of being able to meet and know several generations after hers was made possible because of her obedience to the Lord.

In 2017, a similar story surfaced and was reported by China Daily. It featured a 117-year-old woman who also had the privilege of meeting five generations of relatives. The woman, named Zhu Zhengshi was born on September 21, 1900. At the time the article was written, she was living with her then 84-year-old son in a farmhouse in Shuangliu district. He claimed that the centenarian would carry on about with physically demanding chores such as cutting grass for the pigs they kept and sweeping the courtyard with ease. She only stopped after a fall caused a fracture in her leg the previous year.

However, the woman reportedly still made sure she walked around the courtyard for exercise. For her 117th birthday party, over 100 of her descendants spanning five generations showed up, with a sixth generation member on the way. The many tables at the party were laden with nine dishes each to symbolize longevity. As for the secret behind her long life, her son revealed, "Mom has a simple diet. In the morning, she has porridge with sweet potatoes. For lunch and supper, she has some fish, stewed pork and vegetables. After lunch, she takes a nap." He also added, "She has a good temper and never concerns herself with trivial matters. That might be her secret to longevity." Quite interestingly, Chengdu, the woman's hometown, is home to at least 1,000 centenarians according to the Chengdu office in charge of affairs for the elderly.

Perhaps there really is a secret elixir for long life. Until that is found, people like Berry will give us hope that maybe we too can live long enough to see the world change for the better and see our equivalent of a black President leading America.