A security guard at Millennium Park said that Jordan Block mechanical chair could end up hurting other children running around and playing by the fountain. 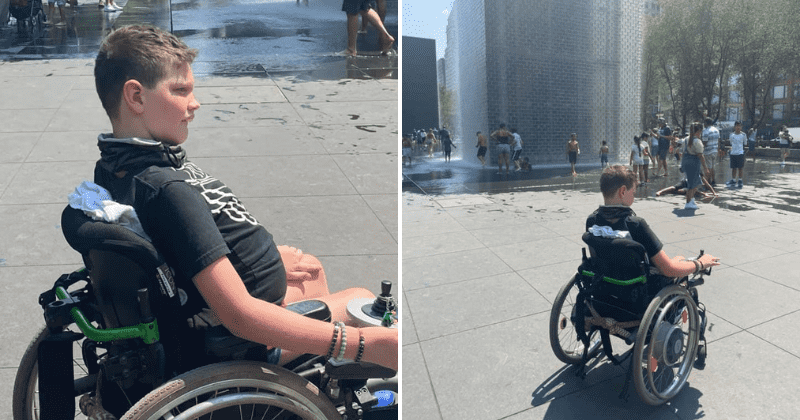 A fun outing to the park turned out to be a traumatic experience for Jordan Block. The 10-year-old has spinal muscular atrophy and has been using a mechanical chair since the age of two to move about. Last week, when he went to Chicago's Crown Fountain at Millennium Park to take a dip in the water, to cool down on a hot day, he was rudely told by the security guard to leave. The security guard felt that Jordan's mechanical chair was a hindrance and "liability" that could end up hurting other children running around and playing by the fountain.

Jordan's mom, Megan took to Facebook to share the heartbreaking incident and the blatant discrimination against disabled children. "Honestly Chicago, you could do better," she wrote in the post. "Here my child is, unable to get wet here on this hot 90-degree day because him driving his wheelchair isn’t allowed. The 'security guard' told us to get away from the water because my ten-year-old is a 'liability' there. If another child runs into him and gets hurt, that would be a problem…. How about this? How about not EXCLUDING DISABLED CHILDREN FROM THINGS, watching your own kids, and making sure they don’t run into my child who knows how to drive his chair."

She went on to write: "Thank you Chicago for making my child cry today. He’s gone through more these past 2 months than you could imagine, and you’re not going to allow my child to cool off like the other able-bodied children??? You have the audacity to tell my child he can go by the water without his chair. Sure thing sir! My son will just suddenly gain the ability to walk and go in the water himself. What an absolute freaking joke." Megan also noted that the security guard did not mention or prevent an adult woman in a wheelchair who was also by the water. "I’m sick of this country fighting for rights for everyone else EXCEPT the disabled community," she added.

Boy, 10, is asked to leave park by security guard because of his wheelchair https://t.co/FjP8WIxzxu

The experience left Jordan stunned and made him feel excluded. Speaking to CBS Chicago he said, "There’s not much else I can do, and that is something I can do – so it’s fun for me. I’ve been here before and have been able to do it." His mother stood by him steadfastly and said, “I was like, ‘This is unacceptable! You know, you’re able to do this, and it’s perfect for you, and we’re being told, ‘No!'” So Jordan went in to enjoy the fountain anyway and no one was hurt either. “I don’t want it to happen to anyone else,” he said. “I want it to be fair for everyone.”

Megan also reflected the same sentiment and said: "I think there needs to be better training. I just think not just there, but all over the city. People in wheelchairs deserve to play and have fun and go everywhere everyone else goes." Millennium Park has since apologized to Jordan and his family. "Millennium Park was designed to be universally accessible, and Access is one of our department’s core values. Working closely with the Mayor’s Office for People with Disabilities, we are committed to ensuring that everyone in our city has equal access to arts and culture – including Crown Fountain," a statement from Millennium Park stated. "We believe this was an isolated incident. We have addressed the issue with the specific security officer and with the entire security team."